Slogans of ‘Justice for Gudiya’ reverberated  the air in Shimla demanding proper investigation into the horrendous rape and murder of a 10th class school girl in Kotkhai named Saluja (real name hidden)  who got the acronym of Gudiya meaning a doll or daughter. Since 4th July when Gudiya went missing the district of Shimla initially and then many parts of the state saw massive protests in support of the foremost demand of ‘proper investigation’ and action against the ‘real culprits’ who according to the people were at large. The sequence of events has been widely published and I do not want to go into those details, except laying narration of it. Nor am I trying to bring to the fore the investigation which according to general perception is not just botched up but hefty bribes to have been given to veneer the entire case with extremely subjective built up of  the case. I am compelled to write this piece for two reasons: – a) the natives did not defend their ‘own clan’ people rather were in all out support for the ‘Nepali worker’ who they believe was falsely implicated and arrested and later killed in police custody allegedly by a co accused in Kotkhai police station. Why? Why people offended their own natives. So is it a good sign. Of course, yes. And b) the massive participation of the people by large numbers where the entire state was thrown on the back. In Shimla, I have been a witness to many movements and agitations, the largest being the apple growers’ agitation in 1992 for economic demands; the present one surpassed that in peoples’ participation. Why was it so that social issues knocked the state down and virtually paralysed the system? Now before I cover these two aspects of ‘Justice for Gudiya’ movement, let me place the sequence of events as they happened.

How it all happened?

It has been covered quite elaborately in the regional press. However, just to place the facts as they have unfolded, the sequence is as:

Meanwhile, more actions, demonstrations are coming up which I believe will not end soon.

Now coming to the two foremost issues that I intend to present and which holds the key for such protests are as: – 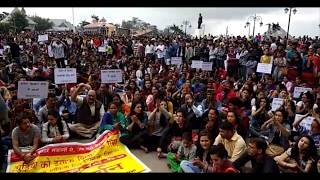 Hence this furore, anguish of the people is long drawn and kept on accumulating which has now reverberated  on the streets for a safe environment and society.

Himachal, a state with semi-tribal, feudal and semi-feudal values is getting transformed with capitalist economy and neo-liberalism as the driving force. The decadent values, culture, spirit of alacrity of becoming rich overnight is growing fast and this ‘nexus’ is getting developed at a steadfast pace. This decadent culture has to be fought with full might and democratic values that requires an unhindered and unflinching struggle on all the fronts i.e. politically, ideologically and culturally. Alternatives have to be shown, built and nourished.

Gudiya thy name for every girl child but not the fate as it happened in Kotkhai !

2 thoughts on “Gudiya the Nirbhaya of Himachal”

This is a text widget, which allows you to add text or HTML to your sidebar. You can use them to display text, links, images, HTML, or a combination of these. Edit them in the Widget section of the Customizer.

This is a text widget, which allows you to add text or HTML to your sidebar. You can use them to display text, links, images, HTML, or a combination of these. Edit them in the Widget section of the Customizer.
Loading Comments...
%d bloggers like this: